Natural Ways to Get Rid of Bumble Bees

Bumble bees are social insects that generally form a colony of their own with a single queen. Bumble bee colonies are usually smaller than honey bee colonies. It can have as few as 40-50 bees in one nest. Bumble bees generally feed on nectar as honey bees. These bees can sting powerfully and multiple times. They usually like to stay away from animals and humans. 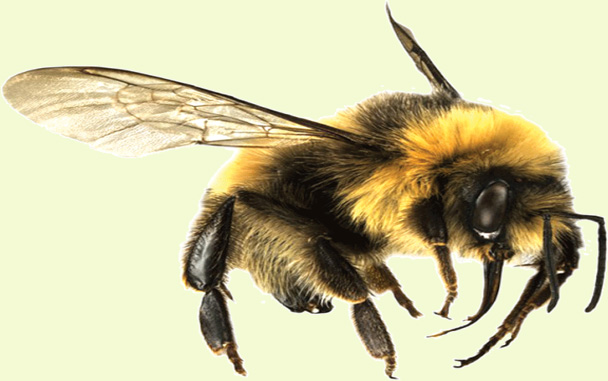 It is best to not kill them as their population is greatly threatened. They make for an important part of our ecosystem. But however valuable their existence might be, it doesn’t make sense for you to share your living space with them, especially because of their harmful and painful stings. But before getting rid of this insect, you should know what kind of bees you are dealing with.

In this article you will learn how to deal with bumble bee infestation at your house, the difference between different kinds of bees, what a bumble bee looks like and the best home remedies to get rid of bumble bees.

What is the difference between various types of bees?

• Bumble bee: Bumble bees generally get aggressive and attack only when threatened. It usually prefers nesting underground or on loose and fluffy materials.

• Carpenter bees: These are oval shaped bees. They have the ability to burrow into a service and leave three to eight inches hole. These are solitary beings. They hardly cause any damage to structural beams. Even then, the individual nests have the ability to multiply and eventually they end up destroying the surface of wood.

• Honey bees: Honey bee nests are much larger than bumble bee nests. Their nests can produce close to thousand workers and can get quite heavy. These bees are known to be extremely beneficial and less aggressive.

Wasps are bees but are known to be more aggressive. Common species of wasps include:

• Hornet: This species is very aggressive; hornets build paper nests that take the shape of an upturned teardrop.

• Wasp: A wasp is thin and long and their legs sort of hang when they are in flight. They have a very painful and powerful sting and generally build their colonies in cars and attics.

• Ground bee: This small species of wasps builds its nest underground. The depth can vary from two inches to two feet. The nests are usually build in abandoned holes and burrows. They are very aggressive and get agitated easily.

• Yellow jacket: These are yellow and black striped insects. They build their nest very similar to that of a hornet. They are also known to build their nests in walls and can chew through a surface wood or a drywall.

You might know in detail – How to Differentiate among Bees, Hornets, Yellow Jackets And Wasps

Bumble bees are fuzzy creatures with yellow and black striped bands on their body. They have a round body which is covered with soft hair, making them feel and appear fuzzy. When the yellow and black colors alternate, it serves as a warning signal. A female bumble bee’s sting is pretty painful. The warning colors can change from yellow to black, pink, white, red and orange, depending on the type of the bee.

What is the lifecycle of a bumble bee?

A solitary queen is responsible for starting a bumble bee nest. This queen bee emerges during the spring season and starts looking for an appropriate place to build a nest. Generally, bumble bees build their nests in old burrows and holes, usually that of a rodent’s. Mice holes are also sometimes used by the queen bee to start building her colony. She lays around 5-8 eggs which then develop into worker bees. This way the queen starts building her colony and by around mid of summer, the colony has up to 100 bee workers.

Read here – How to Treat a Bee Sting Swelling

What is the difference between honeybees and bumble bees?

People often confuse between bumble bees and honeybees. But they are different in a lot of ways. Below listed are a few differences.

• Bumble bees are flat and furry whereas honeybees are slim and smaller, much like wasps

• Different species of bumblebees have tongues of varied length and hence they feed from varied and different shaped flowers. All honeybees have smaller tongues and they generally feed from open flowers.

• Among the bumble bees, just the queen hibernates and that too inside a hole in the ground. Among the honey bees, the queen, along with her many offsprings, stays in the hive and hibernates.

• The queen bumble bees generally lives for a year, but the rest of the worker bees die within a few months. The honeybee queens have a longer lifespan and live up to 3-4 years.

• The bumble bees have their habitat in the wild. They usually build their colonies in the countryside or in gardens. Honeybees have their own personal beekeepers, but there are some honeybees that prefer the wild.

• Bumble bees make small quantities of a substance that resembles honey but is not exactly honey (at least these bees don’t treat it as honey). Honeybees are known to make a lot of honey for themselves which their beekeepers sell away or consume.

• Bumble bee population is threatened, the reason being a scarcity of flowers to eat from and places to build their colonies in the countryside. Honeybees are declining as well; mainly the reason for their threatened existence is mites and diseases.

• Bumble bees generally don’t sting until they are agitated, but when they do, they sting multiple times. Honeybees generally die after stinging someone because then the stinger gets barbed and that sticks to their skin.

• Bumble bees do not communicate by dancing, rather they communicate by passing pollen among the worker bees. Honeybees are known to use some kind of a waggle dance to pass on information about different flowers’ locations.

Now, all said and done, it’s clear that bumble bees can hurt you, or at least damage your properties to some extent. The next big question, then, is here.

How to get rid of bumble bee hives?

There are a number of methods of bumble bee extermination, depending on where they build their colonies (for instance, in the yard, house, garden, in the ground or the car).

Now you know, these bees can be troublesome. Hiring an exterminator to get rid of these bees is going to be expensive. Plus, you don’t want to kill a lot of bees if you can avoid it, right?

So, focus on preventing these bees from making their homes at your property. If that happens, use as many as possible of these remedies for getting rid of bees – Visit for full detail www.howtogettingridofbees.com.