Bees In Winter – Do Bees Hibernate? 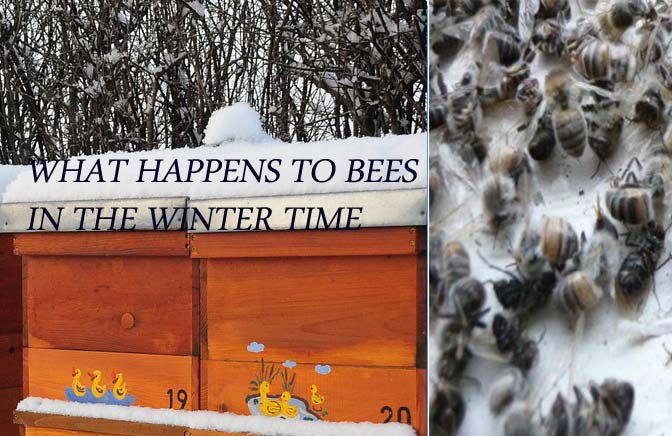 Summer months are the time for picnics and backyard barbeques. Alas, life is not all that easy for bees. They’re busy preparing for the long night. So, what exactly happens to the pollinators when the weather grows cold? How do they survive? And how can we help make their lives a bit easier? We’ll be addressing some of these questions and more below.

What Happens to Bees in the Winter Time?

As summers give way to the chill of winter, we notice a gradual decline in bee activity around us. You won’t find many bees flying about, except for the occasional nesting areas in the warmer corners of the house. That’s because most bees sleep their way through winter and emerge only when the weather turns warm.

Honey bees live through the freezing cold and sustain themselves on the honey and pollen they collected in the summer months. In Bumble bee communities, it is only the queen bee that survives and re-emerges in spring to start a new colony. And the solitary bees either migrate to warmer areas or spend their summers hibernating in underground burrows.

Do Bees Migrate or Hibernate?

Winters have never been kind to bees. Sure, they have their ways to deal with the biting cold, usually by hiding somewhere warm or migrating off to a different place. Some bees migrate to warm tropical areas during winters. Others prefer staying where they are and spend their days huddled up snoozing. Some species in the tropical regions of the planet are active throughout the year because they get plenty of sunlight and nutrition. The bees living in the colder tundra regions need shelter from the weather and only come out once spring season arrives.

Where do the Bees Fly off to in Winters?

Most bee species huddle up in their hives or take shelter underground. The very few that manage to migrate, opt for the southern and tropical corners. The climatic changes and temperature fluctuations determine the bee activity in a region. In the milder weather zones of UK, you can spot bumblebees foraging on exotic flowers even during winters. Bees living in South Asia and South America have no annual life cycle and their population can grow into very large colonies.

Honey bees become less active but not entirely dormant during winters. When the temperatures drop below 10 degrees C, worker bees huddle around the queen, protecting her from the cold weather. The swarm forms a temperature regulating cluster, commonly referred to as the winter cluster, to keep the queen warm and protected. The male bees and drones all drop dead or are driven out of the colony. The rest of them survive on the honey they so relentlessly collected in the summer months. The queen doesn’t lay any eggs in winter since food supplies are limited and the worker bees are busy insulating the hive.

Honey bees head to their hives when the temperature falls below 60-degrees F, with the worker bees snuggling the queen from all sides. The older queen and drones are driven outside to form an insulating layer over the hive, keeping the younger ones warm. As it gets colder, the cluster tightens, fluttering their wings and shivering in the cold to regulate the temperature inside the hive. Phillips EF in his study reveals how during long and harsh winters, the outer covering is usually maintained at 12-degree C. The workers are constantly on the move inside the hive, generating enough body heat to keep the queen alive.

Honey bees hibernate in their nests all winter- think of it like a three-month long slumber party sans the pillow fights or fun. For winters, the bees prefer nesting in warm, high places with solid insulation and plenty of sunlight. Beekeepers try and recreate the nesting conditions artificially to help the bee population survive the long winters. The man-made nests are usually placed in and around tall trees. Derek Mitchell in his study points out how a tree enclosure provides additional insulation to the hives and is therefore an ideal choice for colonies to nest in. Inside a natural tree cavity, the thickness of the trunk generates extra heat, blocking the cold winds blowing above the below the hive.

How Do Bumble Bees Survive Winters?

Hibernation can take up a large chunk of a bumble bee’s lifespan. In the colder months, most of the colony dies and only the lone queen survives. Some queens can hibernate for nine months – that’s almost three-quarters of their life! The queen, carrying the eggs for the next colony, settles for her long nap in a well-dug drained soil, about 10cm deep. The burrow is usually built on the north-facing banks to prevent excessive flooding. There she spends her time eating and resting, preserving her energy for summers. She finally emerges in the spring to find a mate and re-establish her colony and the entire cycle continues.

What Happens to Underground Bees in Winters?

Underground bees are lone creatures that don’t live in huge colonies and spend the long winter in their cocoon, metamorphosing into pupae. The mining bees are one such type that builds burrows underground to hibernate and lay their eggs. Their summers are spent in collecting and storing food in their burrows for the cold months. Most bees don’t immediately emerge from their nests once winter melts away to spring. Some might even stay in their cocoon for multiple winters (a couple of years) before they come out as matured adults. The reason behind their delayed emergence is not yet known, it might have something to do with avoiding parasites or with anticipating rainfall cues.

Where Do the Solitary Bees go in Winter?

Not every bee you see is part of a colony. Some species prefer their own company, fending for themselves, away from the swarm in separate nesting areas. About 70% of the solitary bees, including the cavity-nesting bees and wood nesting bees, stay underground during winters. They are tinier than the commonly found bee species and can easily fit in narrow spaces and crevices around the house. However, these creatures are pretty docile and prefer to stay away from humans. In the UK, the solitary bees hide in their nests and develop to mature adults over winter. If you have mining bees in the backyard, we suggest that you leave some hollowed stems and plants for them to build their nests on.

At What Temperature Do Bees Die?

Bees usually fly about looking for cover when the temperature drops below 10-degree Celsius or 57-degrees Fahrenheit. They cannot fly when the temperature is below 55-degree Fahrenheit and need the warmth of their hive to survive. Bees can endure a maximum of 100-degree Fahrenheit, and do not work when the climate is extremely hot and humid. If you’re creating an artificial nest for the bees, ensure that you have it properly insulated and packed from all sides. Seal the front door with black tar, cover the ceiling and place the hive in an enclosed space, preferably inside the hollow of a tree trunk.

What Happens to the Hive After Winters?

Honey bees are busy all summer collecting food and building their hive. The walls of their abode are lined with bee wax, honey, and pollen grains to protect them in the cold winter time. As the temperature drops, there’s less pollen and nectar to be harvested. The brood population gradually declines and the “winter cluster” narrows down to just the queen and her worker bees. The thermoregulating cluster moves up the hive, consuming the honey supplies as they go upwards and by the end of winter the food stores deplete and the hive degenerates. Come summer, the swarm then re-builds the hive again.

Bees usually store enough food to help them through winters and don’t always need your help. However, an extra helping hand might just increase their chances of survival. If you’re building a man-made nest, we suggest you choose a warm and dry corner to house the pollinators. Here are some useful tips on how to take care of these tiny creatures in winters:

How and When to Check up on Bees?

Winters are arguably the hardest months for the bee colony. It is the slowest time for the beekeeping cycle as well, as there’s not much to do. You just have to keep the hive warm, occasionally check on the bees and feed them on time. Cover yourself, carry an organic bee spray and you’re good to go. Monitor the hive every week and try to move it to warmer locations frequently. Also, ensure that you restock the storage with ample liquid honey, solid nectar, and pollen grains – it protects the bees from starvation.

What Happens When We Take Their Honey?

An average honey bee colony usually produced over 25lbs of honey during summers. In some cases, a healthy, active swarm can manufacture about 60lbs of honey in the foraging season. That’s thrice the amount of honey they’d usually need to survive winters. Beekeepers often harvest the surplus honey supplies and leave the rest for the bees. Ensure that you leave enough supplies for the bees, as they cannot venture out to collect nectar in the biting cold. This sustainable coexistence is mutually beneficial to both the parties. You get the honey and they get your protection.

Just because the bees are dormant in winters doesn’t mean they’re any less dangerous. The bees can still sting you real bad if provoked in any way. As a beekeeper, you have to approach the hive very carefully. Here are some simple yet effective precautionary measures you can adopt when approaching a hive;

Bees are fascinating creatures that have interested scientists, researchers, naturalists and beekeepers over the years. These tiny but resilient creatures have a tough life full of labor and toil all summer. During winters, they stay holed up in their hives and venture out once a while to eliminate body waste and get some exercise.

How do wasps pollinate plants and flowers?

What Do Bees Eat