HomeBeesPollinationDo Only Bees Pollinate Flowers or Even Wasps?
What Do Bees Symbolize? True Meaning of Bee Symbolism Why and When Do Bees Swarm? How to React?

Do Only Bees Pollinate Flowers or Even Wasps? 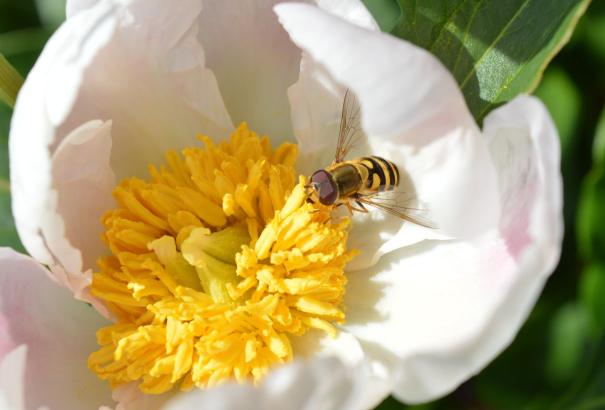 But do all wasps pollinate

The bees have always been crowned as leader pollinators – and have won the praise of all and sundry. Their brethren, the wasps, have never really made it to the top of the popularity charts. Dismissed as just another insect that often administers a painful sting, we don’t welcome it the way we would the bees. Having said that, wasps and bees belong to the same entomological group, the Hymenoptera.

But has it ever crossed your mind whether wasps pollinate flowers and plants?

The answer is, yes. Wasps do help pollinate plants and flowers; and, they do a decent job of it, to be fair to them.

So how do wasps pollinate plants and flowers?

Wasps are primarily carnivorous insects. However, an only-meat diet is not enough for them. They need to supplement it with water and sugar. It would also be good to note here that the adult wasps don’t eat the meat of the insects they prey on; they carry it to their young. Flower nectar and honeydew are readily available sources for these. While the wasps feed on the flower nectar, they often become passive carriers of pollen from one plant to the other of another gender.

Wasps don’t have enough visible fuzzy body hair or pollen baskets like their cousins, the honeybees. Having these makes it easier for bees to pollinate. The nectar and pollen accumulate in a crop inside their bodies and not in the body hairs like they do in the case of bees.

Having said that, however, there are some fine and transparent hairs present on the upper portion of a wasp’s body. These are visible through a high-definition camera. Some pollen grains do get stuck to these hairs (though not as much as bees) and are carried by the wasp to other flowers.

Also, often it’s the color of the plant that draws bees to it. But wasps are not color-conscious and will get attracted to only those plants that produce nectar. Wasps, hence, are more of specialist pollinators and not generalists like the bees.

Though the main objective of the wasp is to draw the nectar, some pollens do get stuck to their body hairs. And certain types of wasps (surprise! surprise!) are better pollinators than honeybees, under certain specific conditions. So, yes – some wasps do pollinate more than bees.

But then, what attracts wasps but not bees?

To cite a few examples, social wasps do a better job of pollination in the case of the plant Schinus terebinthifolius. Then again, Vespula wasps are better pollinators as compared to honeybees in the case of the plant Scrophularia californica. So, honeybees might visit floral plants more but in several instances, it’s the wasp that pollinates more.

Plants that have nectar that’s readily available are more prone to attract wasps. Also the ones with specific coloration (like white or yellow), like the parsley category. Flowers with dull colors and strong odors are more prone to attract wasps for pollination. Orchids are another category that attracts wasps, owing to the abundance of their nectar and their easy availability at shallow depths within itself.

Much can be written about the relationship that orchids and wasps share. Close to 100 orchid species rely almost entirely on wasps for their pollination. And one fascinating point to note here is that many species of orchids effectively mimic the morphologies of the female wasps. They effectively replicate the body scent and overall general appearance of the female wasps. This deceives the male wasps into thinking that these are female wasps, ready to mate. Most of these orchids are found in the Australian and Mediterranean regions.

But do all wasps pollinate?

While almost all varieties of wasps play a role in the pollination process, some are better at it than others. Acting as perfect “backup pollinators” to bees, wasps visit over 950 plants species, out of which more than 150 species are completely dependent on wasps for their pollination. Time to take a look at the “power pollinators” of the wasp world!

More well-known as the “tarantula slaughterers,” the adults of the species kill the spiders to feed them to their young. They visit several kinds of plants, chief among them being milkweeds (Asclepias). From one stamen of this plant, all the pollen gathers into two packets. The packets are connected by some sort of “wire.” As part of their feeding process, these spiders remove the parts of the plant that are necessary for pollination and place them on another plant of the same species.

For over 60 million years, fig plants and fig wasps have been sharing a symbiotic relationship. A large number of small flowers make up the fig. They face towards the inside of the fig. At a certain time, the female flowers inside the fruits are pollination-ready. Then, a nice aroma emanates from the fig. The female species of the fig wasps are attracted by this scent.

Upon reaching the fig, the female wasp pushes and shoves through the fig’s small opening. She visits as many flowers as she can. She lays eggs in their seeds, creating scope for her progeny to spread the pollen from the flower. But nature, at times, is a cruel taskmaster. The female wasp dies after laying eggs. And while the wasp offspring are developing safely within the fig fruit, all the seeds in the fig fruit also grow.

Upon hatching, after a certain time, the newborns mate. The male makes a way out of the fig through which the females leave the fig and the former dies soon after. The newly-born female wasps are carrying the pollen with them as they leave. Now, just like mom wasp, they will find a new fig tree where they will lay their eggs and let the cycle continue.

Yes, the much-seen and much-feared yellow jacket wasps also act as pollinators. But their claim to fame is not pollination but scavenging. They often invade our outdoor picnic spots, eating almost any and everything that they see. So, pollination is not one of their strong points.

Pollen wasps possibly come closest to their bee brethren in terms of the mode of pollination. The adults provide every blood cell of the larva with the requisite nectar and pollen. The females collect the nectar and pollen from the flowers with their mouths. These wasps do not feed on anything else apart from nectar and pollen.

The mouths of the pollen wasps are long. This makes it possible for them to draw nectar from flowers like beard tongues that have deep and slender corolla tubes. The pollen thus collected gets stored in a part of the wasps’ digestive track. Besides the beardtongue, other favorite flowers of the pollen wasps include tansies, borage, etc.

So, that was some kind of an eye-opener, wasn’t it? Many amongst us would not have associated wasps with pollination. But now we know that wasps and hornets do pollinate flowers, and do a fairly neat job of it. Of course, the bees are at the top spot. But that doesn’t take away the credits from the wasps as pollinators.

Hence, the next time when you spot a wasp, stay cautious – but don’t run at it with that folded newspaper!