The life cycle of a honey bee is made up of four important stages. These four stages are the egg, the larva, the pupae and the adult stage. The colonies of honey bees are perennial ones and the only exceptions to this rule are paper wasp and the bumble bee colonies. Every bee colony comprises three main types or castes of bees. These types include the queen bee, the drones, and the worker bees. On an average, the development of a queen bee takes place over a period of 16 days, while the full development cycles of the worker bees and drones bees are 21 and 24 days respectively. 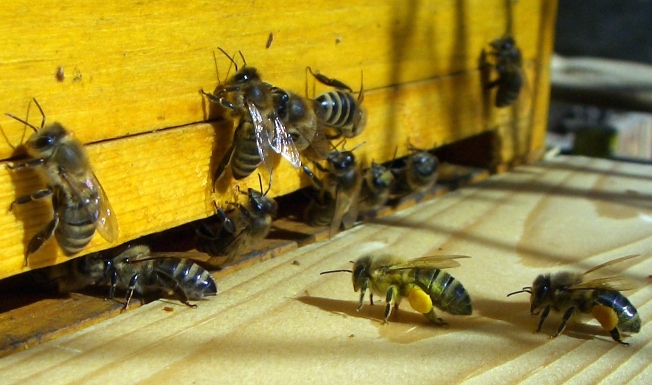 How Long Does A Honey Bee Live?

As mentioned earlier, honey bees come in three different types, the queen bee, the worker bee and the drone. The lifespan of each one of these bees is different from the others.

Here are the details of the lifespan of each kind of honey bee:

Queen Bee, How Long Does A Queen Bee Live?

The queen bee typically has a lifespan that ranges between a period of 3 to 5 years. A queen honey bee will live upto this age only in the condition that she doesn’t have any illnesses or diseases.

The average life expectancy of a worker bee is slightly different from that of the queen honey bee. Worker bees that are born during the summer season live for a period of about 6 to 7 weeks. On the other hand worker honey bees that are born during the autumn season end up living for a period of around 4 to 6 months. The autumn-winter worker bees play an important role in keeping the queen bee warm during the cold winter months by huddling around the queen bee.

Drones end up living for only a few weeks. In some cases the maximum period that a drone bee lives up to is around 4 months.

How Long Does A Bumble Bee Live?

The queen bumble bee has a very different life style and life expectancy in comparison to a queen honey bee. Typically queen bumble bees are born during the late summer and early autumn seasons.

Once the queen bee has mated, she will go into hibernation for the winter months. During the hibernation period a queen bee survives on the fat reserves that are stored in her body. These fat reserves are collected through feeding before the cold season begins.

Once the cycle of seasons has changed and it nears early summer again, many new queen bumble bees will be born in the colony. It around this time that the original queen bumble bee’s life will come to an end. On an average, a queen bumble bee lives for around a year.

Male bumble bees, like the worker bees live for a few weeks. Although they are amongst the last to emerge from the bee colony, they do not hibernate during the cold season and they age and die well before the queen bee.

Honey bees make hives to live in them during the icy cold winter months. It is inside these hives that the worker honey bees also store honey that they feed off. The honey bee’s hive is made from minimal wax in the shape of a six sided tube. This shape is ideal for a honey bee’s hive because it can help the bees store large amounts of honey inside. A honey bee hive is usually made on rock crevices, trees that have become hollow with wear and tear over time, and several other locations that the scout bees deem fit. In order to control the wax texture in the hive, the worker bees hover within the hive in groups and thus maintain an average temperature of 30 to 35 degrees inside the hive. Within the short lifespan of 6 weeks, the worker bees manage to put in all efforts to make sure that the tasks they perform enhance and prolong the survival of the bee colony.

The worker bees source nectar and food from flowers and carry that back with them to the hive. This food that they forage is carried in their pollen pouch. A special enzyme in the pollen pouch mixed with the food and nectar that the bees forage. The worker bees then transfer the nectar from one worker bees tongue to another’s tongue, inside the hive. Eventually whatever liquid was remnant in the nectar evaporates and honey is produced. The functioning of bees in the bee hive is a complex and wonderful process. There are countless bee farms prevalent across the globe. Production of honey for commercial purposes is done in such bee farms.

You might know – How to keep away bees naturally

Honey bee colonies or bee colonies are different from bee hives. Bees are by nature extremely social beings. They live together in large groups in what is called a colony. A bee colony is typically ruled by the queen bee and it comprises worker bees and male drones. The honey bee colonies also carry the pupae, larvae and eggs of the bees. A bee hive on the other hand is where bees raise their little ones.

How is Honey Made and Why Do Bees Make Honey

The life cycle of a honey bee comprises of major stages. These stages include the eggs, the larvae, the pupae and the adult life. The eggs are laid by the queen bee. Each cell of the hive has a single egg laid in it. If the cell is not absolutely clean, the queen bee won’t lay an egg in that particular cell and will move on to the next one. Fertilised eggs are released by the queen bee only in cells that are of a standard worker size. These eggs eventually hatch into female worker bees. On the other hand unfertilised eggs laid by the queen bee are only laid in drones sized cells and they eventually hatch into the drone bees.

The colony life of bees is almost like what life would be living in a palace of a kingdom. The queen bee in the colony is looked after and taken care of by the worker bees. The worker bees, like the commoners of any kingdom, tend to all the needs and requirements of the queen bee and also take care of the colony. The worker bees forage for pollen and nectar, ventilate the hive, feed larvae, protect the hives and colonies from being destroyed and make sure that the colony survives. Overall bees are extremely social insects. It is impossible for a honey bee to live by itself. It needs to be in a colony in order to survive. The worker bees also work towards keeping the other bees alive and safe in the hive.

Honey Bees Are The Only Bees To Die After Stinging

Did you know that honey bees die after they sting a human being or an animal. Other bees like bumble bees and carpenter bees do not have the same fate, but when a honey bee stings a human or animals, it leaves behind the stinger, part of its nerves, muscles, digestive tract and abdomen. This creates a lethal abdominal rupture that ends up killing the bee. However, this rule is only applicable to worker honey bees and not the queen honey bee or any other bee.  Queen honey bees can sting multiple human beings and animals without dying.

How Long Do Bees Live After They Sting?

The worker honey bees end up dies almost instantly after they sting.