How to Differentiate among Bees, Hornets, Yellow Jackets And Wasps

Often referred to as “Killer Bees” by the mainstream media, this species is a cross between the European honey bees and bees from Africa. Africa is a continent known for its primitive, hostile environment where both human and animals were subject to the extremities of nature.

Obviously, only the most aggressive and most feral of beehives could survive in such a habitat. The African bee’s sting hurts real bad and can prove to be lethal if you have the misfortune of bearing the brunt of an entire swarm. Unlike the regular honey bees, they are a lot more aggressive and defensive in nature. They react to danger much faster and can chase a human being for up to 400 meters. The Africanized bees have killed people in the past and have also killed large sized animals such as horses and others.

Interestingly, these giant bees were first introduced in Brazil to improve honey production in certain areas, somewhere around the 1950s. Much like a Hollywood movie script though, there were unexpected twists and turns, as around 26 swarms of bees escaped and spread all throughout North and South America. That’s because the quarantine they were kept in wasn’t secure enough.

If you notice any signs of infestation by these killer bees in your neighborhood, start looking for ways to get rid of them immediately.

Let’s discuss the strategies for the identification and removal of Africanized honey bees:

How to Identify Africanized Honey Bees?

The African Honey Bee is a part of the western bee species of Sub-Saharan Africa. These bees are also found in some parts of America. The scientific name of these creatures is Apis mellifera scutellata Lepeletier. Though more than 10 subspecies of the western bees found in the western region, it is only the A.m. scutellataspecies that can be said to be truly Africanized.

A normal bee would calm down after 20 minutes and resume its regular activities; an African bee can remain hostile for hours. Also, Africanized black bees are solitary as compared to the regular honey bee that prefers to forage for pollen in swarms.

Of course, they are. The numbers of killer bee caused deaths in and around American and Africa have reached an alarming number in the past few years. African bees attack in large numbers, and are lethal because of the reason. A solitary African bee is no more dangerous than its European relative. It is the number of stings that one is likely to receive in an encounter that makes all the difference.

One can think of coexisting with a regular European honey been because of their docile nature; African bees are a different story altogether. These bees are extremely defensive of their hive- even the most insignificant of interruptions can cause them to attack. So, to answer the question – yes, African honey bees do pose a threat to the inhabitants of the property when provoked and disturbed.

What Do They Eat?

African Honey Bees have pretty similar eating habits to regular bees. They feed on the nectar from flowers, pollen grains. The killer bees prefer to forage for food and water in small groups, unlike the normal bees that swarm in large clusters. Honey bees are attracted to sugary stuff like fruits and flowers. Africanized bees spend a lot more time foraging for food than their European cousins; they need that extra protein to maintain their population. Also, these killer bees are more aggressive, active and hostile towards intruders. They get up earlier, work harder and visit more plants than their European cousins. In fact, Africanized bees continue collecting nectar even late into the night.  During the hard times, these bees might also raid other beehives and steal their honey.

Every bee makes honey to eat and help the hive survive through the winter month; the Africanized bees are no different. These bees are highly effective pollinators that work even in the cold weather and light rain to gather food for their colony. Also, these stinging insects are better suited to the dry heat and humidity of the summer months.

African honey bees can produce more honey, carry more pollen and live a longer life than their European cousins. Raw, unprocessed honey is an excellent source of energy that boosts your immunity and helps in weight loss. Therefore, African bees are often reared in beehives by professionals in several pockets of South and Central America, Africa, and the US. 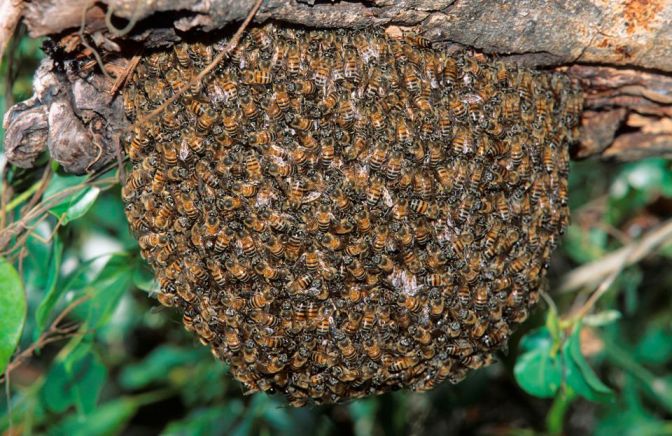 Where are they found?

The Africanized honey bees are spread out all throughout the continent of Africa and North and Central America. Other than that, they are also found in the southern corners of US including states such as Texas, New Mexico, Arizona, Alabama, and Florida.

The story of how these killer bees entered America has become legendary over the years. It all started back in the 1950s where a new sub-specie of bees (a hybrid between European bees and native bees of Africa) was reared in an artificial environment. The breed of bees was kept in a special apiary away from the other species. There were special screens that separated them from the other hives around. The new species was a lot more aggressive and quickly managed to break through the barriers onto the other hives and mate with them.

Even the standard honey bee sting contains some venom. It all dumbs down to the number of stings the victim has endured and the amount of poison that was injected into your bloodstream. A wild African bee attack can be dangerous and often fatal to humans. However, a solitary bee is not a danger to people, a swarm of them definitely is. The stingers of the Africanized bees leave behind pheromones that end up attracting more bees. Wearing strong perfumes or fragrances while attempting to get rid of the Africanized bees can also be dangerous as the bees are attracted to strong fragrances. So the next time an Africanized bee stings you, get the stinger out and run for your life. Chances are that the swarm of bees is close by. It is best that you jump into the water or douse them with soapy water or insecticides to get rid of them.

By now, you know that the Africanized honey bees are an aggressive, dangerous bunch that you must not mess up with. Unlike their European cousins, these bees do not settle down immediately but harbor defensive tendencies for quite some time. Both the bee species have a very familiar structure and appearance, the difference lies in their behavior and nesting habits.

While the African honey bee moves around in shorter groups, the European ones have huge colonies. Also, African bees work longer, have stronger immune systems and can carry more pollen when compared to their contemporaries. Africanized bees, however, cannot survive in temperate climates as well as normal honey bees do.

The main point of difference is that the European bees are not so dangerous. Sure, their stings hurt the same and have the same amount of poison, but the quantity of the venom injected is less. Africanized bees attack in larger swarms and can chase a person a considerable way (500 meters) from their hive. Also, their stings are fatal because they attack in numbers.

How To Remove Africanized Bees?

Removing Africanized bees from your surroundings is absolutely essential. You do not want to cross paths with these pesky insects! On an average, these killer bees end up killing 2 people a year. These bees haven’t been termed killer bees without a reason. The question remains, how to kill them? There are three main ways in which you can get rid of these dreadful and trouble causing insects:

Most people can deal with a regular bee infestation around the property as the European bees are a lot less aggressive and easier to control. The African bee swarms, on the other hand, are extremely defensive of their home and can go to any extent to protect it from intruders. Therefore, the safest and most efficient way to get rid of these dreadful bees is by hiring professionals to do the job for you.

You locality will probably have local bee removing agencies that have the necessary tools and safety equipment to get rid of the bees in the best way possible. If for some reason you’re unable to find the contact number of a local bee removal unit, you can contact your nearest fire department to provide you with the correct contact. Bee removing services, though expensive are more competent at handling a bee infestation than the general pest control services of your town.

Make sure that the bee removal agency removes the entire beehive and doesn’t end up leaving even a small part of it behind. Any part of a beehive left behind will only end up attracting more bees in the future and can even lead to an African honey bee invasion.

Listed below are some simple yet effective precautionary measures that everyone must adopt when dealing with Africanized honey bees so as to reduce the risk of getting hurt.

An African honey bee invasion is a scary place to be stuck in the middle of. If you happen to live in an area that is known for harboring these creatures then arm yourself with the correct knowledge and ways to deal with them.

Read here: How to Treat a Bee Sting Swelling