HomeBee Facts & HabitatWhat Do Bees Eat (and Drink)? How Do They Survive
Why Bumblebees Don’t Make Any Honey About Robber Bees & How to Stop Hive Robbing

What Do Bees Eat (and Drink)? How Do They Survive 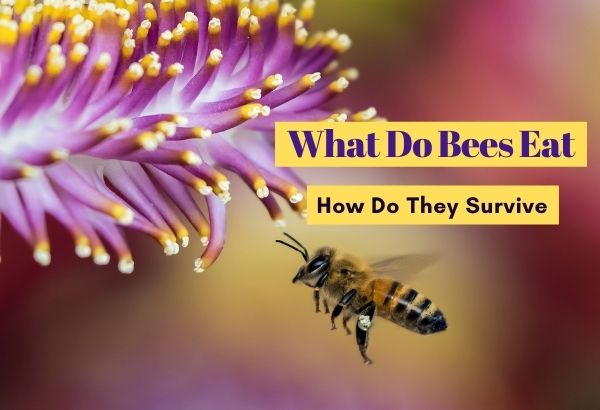 I was chatting with a friend a couple of days ago about carpenter bees, and through the course of conversation, she said, “Those wretched things ate through my porch supports.”

After that, I proceeded to ask her what she thought carpenter bees ate, to which she replied, “Well, the wood, of course! *laughs* Why don’t you come over and see just how much?”

This sparked my interest in writing this article on what bees like to eat because apparently, there’s a lot of misinformation making the rounds.

To finish the above example of what carpenter bees eat, they eat plant pollen and drink nectar from the flowers they visit to harvest pollen.

Another question I get asked daily is: what type of wood do bees eat. To this, my answer is “none.”

Yes, I’ll admit that they damage wood, but that’s just to carve out a cozy nook for their larvae to live in, not to consume the wood for nutrition.

To cut a very long story short, bees eat a mixture of plant pollen and flower nectar in different ratios depending on their age, class (worker, drone, queen), and species.

Some bees (like the vulture bee) will consume carrion instead of pollen, but that is only because they live in areas where flowers and plants are very scarce.

Further on in the article, I’ll explain what bees like to eat daily.

It is a common misconception that bees don’t eat at all. There are several insects, such as certain species of butterfly, that don’t eat.

They are born, and their sole purpose in life is to find a mate to reproduce with. A prime example of such insects is the imago of silk moths and mayflies. (imago = last stage of metamorphosis).

Their lifespan is extremely short, and people tend to assume the same for bees. While it is true that bees do have a very short life (five to seven weeks on average), they do eat, and voraciously at that.

Fun but random fact: one honeybee produces one teaspoon of honey in its entire lifetime.

Why do bees eat pollen?

Well, the answer is more complicated than you may think. Bees don’t necessarily eat pollen for nourishment: most of their nutritional needs are taken care of by the nectar they drink.

However, some bees eat pollen to transport it back to the hive if their “pollen baskets” (especially formed body parts on the rear that scoop up pollen from flowers) have reached capacity.

The pollen is essential for the hive because it is one of the main ingredients in the all-important honey-making process.

Aside from pollinating 35 percent of the food we eat, the workers mix pollen with a unique bee secretion and feed it to their larvae in the first growth stage.

This works because pollen is a protein-rich energy source, although all species of bees don’t eat it.

What do bees drink?

Aside from pollen, bees also glug down large amounts of nectar (from 25 to 80 milligrams per foraging trip, depending on the species).

Nectar is arguably the primary ingredient in the bees’ honey-making process.

How exactly does that work? I’ll be very brief.

Yes! All bees that produce honey eat it too.

While nectar is a bee’s favorite food, there are often times when nectar is in short supply or is simply not readily available.

In such a situation, all nectar will be used to feed and care for the larvae in the hive, and the adult bees will turn to their honey reserves to make up the nutrient deficit.

This is why beekeepers need to carefully monitor the levels of stored honey in their hives when nectar is scarce because if the supply runs too low, the bees in the colony will start to starve.

That’s not the only scenario when bees eat honey, however.

The above situation mainly applied to worker bees because they are the ones who are to be found out and about gathering nectar.

On the other hand, Male drone bees are birthed with the sole purpose of repopulating the hive, after which they die.

Since they don’t go out foraging for food, they don’t have firsthand access to either nectar or pollen like the worker bees do.

That is why drone bees stay inside the hive and feed on a portion of its honey reserves between their mating and resting sessions.

The bees also create and store a sizable amount of honey as food stock in the cold winter months.

You see, flowers are much harder to find in the winter, and even when you do find the occasional patch of blooms, it’s never nearly enough to meet the hive’s needs.

So what do queen bees eat then?

Do queen bees eat nectar or pollen too? No. For example, the queen honey bee diet (and most other queen bees) consists of “royal jelly.”

This is a milky, white substance that is made by the female worker bees from nectar.

Note: all larvae eat royal jelly in the first cycle of their development into adult bees, but the larvae chosen to be queens are fed exclusively on royal jelly.

Royal jelly has a much, much higher nutritional content than nectar or honey.

Also, since royal jelly is all that the queen bee eats, she grows significantly larger than the rest of the hive.

The high protein in royal jelly enables the queen bees to lay 2,000 eggs per day (whoa).

Do bees eat other insects?

Ummmm…not usually, But as with most other things in life, there are caveats to this as well.

Remember those “vulture bees” I mentioned at the start? Their real name is Trigona Hypogea, and these are known to eat dead insects and lizards, aside from other carrion.

Vulture bees live in deserts and the like, where there is little to no vegetation, so they need to resort to scavenging to survive.

As a result, they produce a relatively moderate amount of honey that barely lasts the hive through the winter months.

These vulture bees will eat anything dead and has meat on it. Such is the behavior dictated by the law of survival of the fittest.

That said, the opposite is also very true: there are loads of things that love eating bees in turn.

I understand that bees seem like a weird thing to eat, what with their fuzz and stingers and all, but there are several animals, from birds to beetles, that like feasting on our furry flying friends.

Skunks, rodents, bears, badgers, beetles, and several species of birds make bees one of the main courses in their diets.

Skunks and bears will repeatedly return once they have found a hive and will eat large numbers of bees until the hive is completely depleted.

They usually then proceed to break the hive to access the honey reserve that is stored inside.

And oh, you might want to add humans to that list too. Yes, that’s right. It is estimated that over two billion people eat insects as a daily part of their diet, and bees are also on the menu.

Apparently, the taste and texture of the cooked larvae and pupae of bees are strikingly similar to smoked peanuts or almonds.

In fact, in some parts of Africa, “brood combs” are considered a delicacy. That refers to a slice of the hive, replete with larvae, honey, and drone bees.

Since drones don’t work for pollination, eating brood combs has no effect on the pollination in the area.

Do all species of bees eat the same thing then?

I’ve had countless people come up to me at the local beekeeping enthusiasts meeting and ask
“What do bumble bees eat?”, “what do solitary bees eat?”  or “what do honey bees eat?”.

The answer is the same all around: pollen and nectar, and when supplies run low, their own honey. The only notable exception has already been mentioned — the vulture bee,

All bees were designed as pollinators and are hence equipped with all the same tools as other species of bees. That is why they have such similar diets.

How do bees eat?

There are two ways insects gather nectar: by sicking it up through a long pipe or by dipping their tongues into the flower to scoop up the juices.

Bees prefer the latter, simply because it is a more efficient way to collect even the most viscous of liquids.

Well, that’s all for now folks! If you’re interested, you can read up on how and why bees make honey at this link, and learn more about carpenter (wood) bees at this one.

See you next time!

Do Wasps and Hornets Make Honey?