HomeBee Facts & HabitatHow to Differentiate among Bees, Hornets, Yellow Jackets And Wasps
Killer Bees – How To Identify and Get Rid of Africanized Honey Bees

How to Differentiate among Bees, Hornets, Yellow Jackets And Wasps 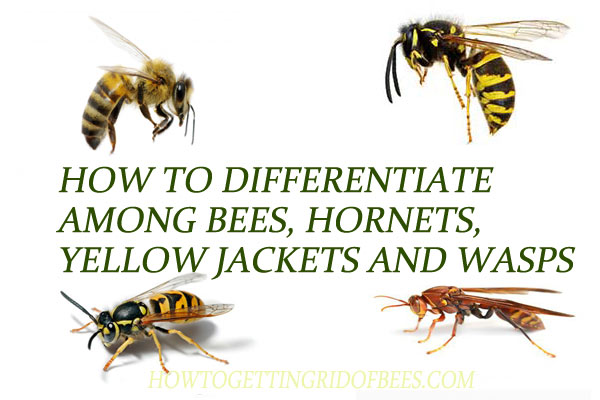 ‘Bees’, ‘wasps’, ‘yellow jackets’, ‘hornets’- the mere mention of these words is enough to make many of us shudder. The fear of those painful stings has, however, caused a great distrust and dislike for these creatures, more than they actually warrant. A lot of people are getting into entomology and apiculture as a passion.

Have you ever wondered the nuances of their characteristics – bees versus hornets versus wasps versus yellow jackets? Understanding begins with knowledge. Their similar physique and pattern lead to confusion and unnecessary fear. There are approximately 20,000 species of bees found across the world (except in the South Pole). The most common types are honey bee, carpenter bee and bumblebee. Wasps are old, so old as to be found in fossils from the Jurassic Period. Till date, around 70,000 species of wasps are known to exist worldwide.

Hornets belong to the genera Provespa and Vespa, and are the largest among the eusocial wasps. Only three belong to Provespa. And all of them are nocturnal. Yellow jackets, on the other hand, are predatory wasps and belong to the genera Dolichovespula and Vespula. It should be noted here that hornets are a subspecies of the latter in spite of being very different in the case of some species. They both belong to the Vespidae family. The yellow jacket is not exactly a hornet.  And, the hornet is a type of wasp not native to North America.

Here’s a tabular representation of the creatures and the scientific names of the families they belong to.

Already confused? Don’t be. Here is a pretty comprehensive guide to help you with a proper understanding of how each of these species differs from the other.

This one’s for the scientifically aligned. The best thing is always to get your science correct. So here we go.

Know them by their looks

It is a bit tricky to distinguish wasps from bees, but is possible with a little bit of practice. Bees display a great variety in size, ranging from a few millimeters to a 39 mm, as do the wasps. The largest social wasp is the Asian giant hornet, measuring around 2 inches in length, and the largest solitary wasp is the Megascoliaprocer, with a wingspan of 11.5 cm. The smallest wasp species is the Chalcid wasp, measuring an unbelievable 0.0055”.

Bees have a darker shade of yellow and are fatter than the wasps. Wasps are thin and long, and unlike bees, have little or no hair. Bees have flat and wide legs while wasps have waxy and roundish ones.

Yellow jackets are very bright with yellow and black markings throughout their bodies while hornets have the yellow alternating with some shade of brown. Hornets with a light reddish brown colour stick out and are easier to distinguish from yellow jackets as compared to the ones with dark brown markings. The bald-faced hornet is very distinctive thanks to its black and white combination. Hornets are larger than yellow jackets. While an average worker yellow jacket is 0.5” and the queen is 0.75”, some hornets can be as long as 2.2”.

Behavioral differences of bees versus wasps

Bees and wasps share a strange relationship. In spite of being close relatives and belonging to the same suborder, behaviorally they are very different. Bees are pollinators whereas wasps are chiefly predators. For example, honey bees are the best and the most celebrated pollinators and they live on only nectar from flowers. Wasps also scavenge, though some species have been known to feed on nectar.

Hornets are the most aggressive among the insects considered here. Bees are very gentle and social in comparison and will sting only to deal with an absolute threat.

Read here – How to keep away wasps

Bees are much more sociable than wasps, and will not sting unless aggravated. They can sting only once in their lifetimes as their sting gets embedded in the skin. Their predatory nature and their habit of scavenging make hornets very aggressive and bring them into more frequent contact with humans. As they retain their stings, hornets can sting multiple times without sustaining any harm to themselves.

Yellow jackets versus hornets is a fascinating comparison. Yellow jackets cause more nuisance than hornets because they find sweets simply irresistible. Meaning that you need to watch out for your glass of fruit juice. This is very important as they have probably visited the garbage dump looking for food before coming to you. Hornets feed on other live insects, meaning they can be actually beneficial.

Bites are hard to deal with everywhere. Yellowjackets sting more frequently than hornets, but those are much less painful, and they usually die after stinging as their stingers get caught in the skin. Hornets can repeatedly sting humans as their stings are not barbed, unlike yellow jackets. This leads to human deaths now and then.

Where do you get the honey from?

Bees have highly developed nests called hives; these creatures exhibit awesome social order. These bees live in groups called colonies with highly organized practices around division of labor. Their hives can have as much as 40,000 bees during the peak season of spring, but will have only one queen! Bees have wax-producing glands which come to use while building the hexagonal cells known as honeycombs. While members of the subgenus Apis use natural cavities, hollow trees and caves as nesting sites, other subgenera are okay with exposed aerial combs. Some solitary bees rest in the ground near each other, giving the appearance of a colony.

Since wasps have no wax producing glands, they work harder and produce a papery substance using wood pulp. This is made from the action of saliva on chewed wood fibers gathered from local wood. While combs made of these are common, they rather prefer a substrate like the soil or plant stems to create burrows. Nests are also constructed from mud. Solitary wasps, on a completely different note, are often parasitic and build nests only if they are predatory. The division of labor in colonies is similar to that of the bees, though there can be more than one queen present in a single colony.

Hornets and yellow jackets, in spite of their characteristic similarities, have widely different nesting habits. Hornets have nests in the shape of pendulous teardrops which look like the typical beehive. Yellow jackets prefer to nest in confined spaces below the ground, often taking up abandoned rodent nests.

Parasitic wasps, which are solitary, do not have nests at all but depend on the bodies of other creatures, at least in their initial stages. Sometimes, the host is paralysed by certain toxins before the female lays eggs. The host usually dies after the larvae become self-sufficient. Some parasitic wasps develop symbiotic relationships with polydnavirus which severely weakens the host’s immune system.

Both eusocial bees and wasps have a division of labor based on the sex of the bees. And the way the sex of the larvae is controlled by the queen for all the social species is simply amazing. Bees and wasps are famously haplodiploid species, meaning that females develop from fertilized eggs while males develop from the unfertilized ones. This is to maintain the eusociality, which includes collective caring for the brood, division of labor according to sex, and generational overlapping. Some wasp species have females who use mechanisms to recognize their brothers and thus avoid inbreeding.

Bees have the most structured social order amongst similar insects. A single queen is the mother of all the drones and workers, which are sterile females. The presence and number of drones vary according to the colony cycle, but a large number of workers (unfertile females) are always present. Unlike wasps community, where the queen is alone at first, it is the workers who do all the work right from the beginning among bees.

The nests of social wasps including the hornet and yellow jackets are initially built by the queen in the form of paper-thin jacket like structures. The queen then lays eggs which hatch to produce sterile females. These then go on to construct the full-fledged nest, while the queen(s) lays eggs.

How long do they live – bees vs wasps vs hornets and yellow jackets?

The lifespan of the bees depends on their sex. Worker honey bees usually live up to six weeks in the honey production seasons, while the queen of the colony can live for up to five years. The drone lasts either a mating flight or the summer in case of failure of mating. Once summer is over they are kicked out of the hive and eventually die of cold and starvation.

Hornets and yellow jackets have similar lifespans as both are social wasps. This means on an average, the workers, which are sterile females and the most numerous, live for 12-22 days. The drones or fertile males live slightly longer than the former to ensure proper insemination. The queens, or the fertile females, which are the least in number, live the longest, like about 12 months. As the female can store sperm, she can do with only a single mating.

Are they as bad as you think them to be?

As you know by now, no. Bees, hornets, wasps and yellow jackets – all have their set roles to play in the system of nature. And we, as human beings, often benefit from them.

Honey bees, of course, are the only source of natural honey. They also happen to be the best pollinators around, making them the natural preference for gardens and orchards. They are also a source of beeswax.

Wasps do not produce honey nor do most of the wasp species help with pollination. But some of them do, and do it well. As most wasps are parasitic at some point in their lives, some species like those belonging to the Trichogrammatidae are used commercially as a biological control for pests.

Wasp species like the hornet are belligerently predatory and are used for active pest control in horticulture and agriculture. They also act as natural cleaners due to their scavenging nature.

Fascinating, aren’t they? Well, they definitely are more civil and intelligent than you had been giving them credit for all this time. So the next time you think of breaking that big hive in your garden, give second thoughts to the amount of work that has gone into it, and the role it plays in nature. Sure, insect control is always a viable option, but should be done very wisely and only when there are no other options left.

Know more – How to Get Rid of Africanized Honey Bees